As remembered by Bob Nash:

Later a 14-year-old guitar Phenom Terry McClanahan was added as lead guitarist after Mark had moved on.

Our first gig was Jennifer Bondhus’ Birthday party. I think we only knew 3 or 4 songs; Farmer John, Louie Louie, In the Midnight Hour, and Memphis.

That was the beginning of 3 years of fun and music. We played quite a few venues, FHS after game dances, Findlay and Fostoria Teen Centers, Record hops in Upper Sandusky, Findlay Country Club Pool parties, CYO dances at St. Michaels, Fostoria battle of the bands, and we even played at the lake. We would ask if we could set up on an empty trailer pad, play music, and pass the hat. That was a lot of fun. We were all under the age of 16. One of my favorite memories is playing Gem Beach, huge for us as the Music Explosion had played the week before!

Our song list grew quite a bit from our first gig. We did songs by the Animals, the Stones, the Yardbirds, the Beatles, Box Toms, Them, and so on.

The funny part is the way It turned out I became lead singer. I guess my singing was better than my guitar playing. The other funny thing was our Jeep Waggoner (The Wanda Wagon). Equipment in the back, 3 guys in the front seat, and two guys in the back on top of the equipment.

Mark resides in Boulder Colorado in the advertising business, Ed lives in St Augustine, Florida, Bob is a retired business man, and Dave teaches and writes, both of them are still living in Findlay. Percie resides on Catawba and Terry passed away three years ago.

We would do it all over again!”

As remembered by Dave Phillips:

“I began playing drums in popular music bands shortly after The Beatles appeared on the Ed Sullivan Show. My first ventures were with a nameless country music group and instrumental music bands. I was only 12 or 13 years old when I had my first experience with a country group. It was a good band, but I can’t recall any of the songs we played. The other members of the group were much older than me. Alas, I never performed with the group (my mother thought I was too young). Afterwards I played in small groups with local players such as Bob Dyer, Terry McClanahan, and Floyd Dillinger. I played drums with Bob and Terry in the instrumental bands and sang with Floyd’s band.

By the time I was in the 8th grade I was able to join The Wanderers. The line-up of that band included Bob Nash (vocal), Percy Davis (bass), Ed Lowe (organ), and Mark Mitchell (guitar). The Wanderers played a lot in those days, mostly performing for after-game dances and other school functions, private parties, teen clubs, and college fraternity parties. It was all pretty eye-opening for a 14-year old, I learned a lot then. I played drums with The Wanderers for almost two years. When I joined The Wanderers they were playing a mix of standard late 50s/early 60s pop (The Kingsmen, The Beach Boys, various instrumentalists). By the time I left the group we were playing more contemporary rock (The Beatles, The Rascals, various chart singles) and rhythm & blues (mostly the hits from Motown, Atlantic, and Stax/Volt).

During my years with The Wanderers I began to play the guitar seriously. By the time the band dissolved – the other members graduated from high-school and moved on in their lives – I had decided to focus my music work entirely on the guitar. After the band’s demise I played guitar and sang with a few other local groups – notably The Raging Storms and The Variations – and maintained a working musician’s lifestyle. There was a lot of work for bands in those days. The drinking age was 18 (for “low” beer), the club scene was thriving, and the pay-scale was good enough that I didn’t need any other work.” 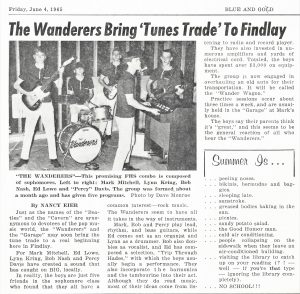